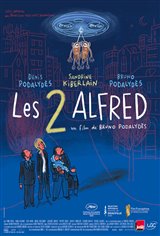 Due to a past prank, Alexandre, an unemployed man in his fifties, has two months to prove to his wife — who works abroad on a submarine — that he can take care of their two young children and ensure the family’s financial stability. Luckily, he’s hired on a trial basis by a communications start-up. But there’s a catch: the young manager doesn’t want any employees who have children. Alexandre asks his new friend Arcimboldo to pass himself off as the father of his children to his boss and his new collaborator, the demanding and brittle Séverine.