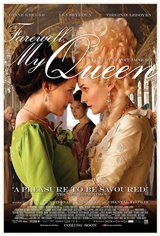 Versailles, 1789. As chaos erupts in Paris on the eve of the French Revolution, the people within the Palace of Versailles go on with their daily routines. But the peace is short-lived. Along with the other laborers and members of the court, Sidonie Laborde, Queen Marie Antoinette's devoted reader, learns of the storming of Bastille and tension begins building within the corridors of the palace.

As the news spreads, commotion ensues when the panicked courtiers realize the extent of the public's discontent and quickly flee Versailles. Refusing to be daunted by the news, the queen continues to meet with the worldly Duchess Gabrielle de Polignac, who shamelessly exploits the affection of the monarch. When the angry crowd finally reaches the gates of the castle, Marie Antoinette turns to Sidonie to help with her escape plan.

The film, which focuses on the relationship between Marie Antoinette and the loyal Sidonie, is based on the best-selling novel written by Chantal Thomas.