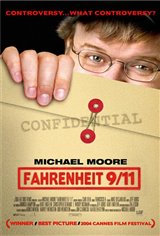 Documentary filmmaker Michael Moore reflects on the current state of America, including the powerful role oil and greed may have played after the September 11, 2001 terrorist attacks. He also depicts alleged dealings between two generations of the Bush and bin Laden families, and other Saudi groups.

Winner of the Palme d'Or award at the 2004 Cannes Film Festival.