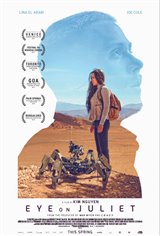 From his position seated before screens in the United States, Gordon (Joe Cole) operates a spider-like drone in the Middle Eastern desert, in order to keep the oil pipeline safe. When he views a young Middle Eastern woman named Ayusha (Lina El Arabi) more than once on his screens, he becomes fascinated by her. She's in love with a young man her age, and when Gordon uses the voice translation function on his drone, he hears the man tell Ayusha he wants her to run away with him to Paris.

However, her family takes her to meet a man much older than her, to whom they've promised her hand in marriage. Ayesha, refusing to marry him, is locked up. Gordon, who finds himself falling for Ayusha, decides to use his spider-like robot to help her escape her fate. He blows open the window of the building where she's being kept, and she escapes with the robot spider by her side.