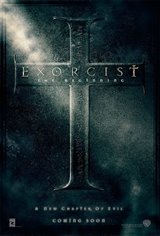 Father Lankester Merrin thinks that he has glimpsed the face of Evil. In the years following World War II, Merrin (Stellan Skarsgård) is relentlessly haunted by memories of the unspeakable brutality perpetrated against the innocent people of his parish. In the wake of all he has seen, both his faith in his fellow man and the Almighty have deserted him. He can no longer honestly call himself a man of God.

Merrin has traveled far from his native Holland in a desperate attempt to escape the horrors that he witnessed there. While drifting through Cairo, he is approached by a collector of rare antiquities to join a British archeological excavation in the remote Turkana region of Kenya. They have unearthed a Christian Byzantine church in inexplicably pristine condition -- as if it had been buried on the day it was completed. The collector wants Merrin, an Oxford-educated archeologist, to find an ancient relic hidden within the church before the British discover it.

But beneath the church, something much older sleeps, waiting to be awoken. Madness descends upon the local villagers and the contingent of British soldiers sent to guard the excavation. Merrin watches helplessly as the atrocities of war are repeated against another innocent village -- atrocities he had prayed never to see again. The blood of innocents flows freely on the East African plain, and the horror has only just begun.

In the place where Evil was born, Merrin will finally see its true face.