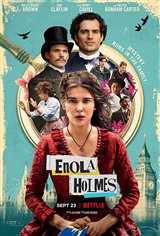 England, 1884. Enola Holmes (Millie Bobby Brown), the younger sister of famous detective Sherlock Holmes (Henry Cavill), wakes up on the morning of her 16th birthday to find that her free-spirited mother, Eudoria (Helena Bonham Carter), has disappeared. She's left behind an odd assortment of gifts, but no explanation as to where she's gone or why.

Sherlock and their eldest brother, the uptight Mycroft (Sam Claflin), soon arrive. Although Enola hopes Sherlock will help her find their mother, Mycroft is in charge and decides that Enola is a wild child who would benefit from being sent to a finishing school for "proper young ladies."

Headstrong Enola escapes at her first opportunity so she can be free to search for her mother in London. When she meets the young runaway Viscount Tewkesbury (Louis Partridge), her journey leads her to become entangled in another mystery. Enola becomes a super-sleuth in her own right, outwitting her famous brother as she unravels a conspiracy that threatens to set back the course of history.

Based on the beloved book series by Nancy Springer.