Don't Come Back From the Moon 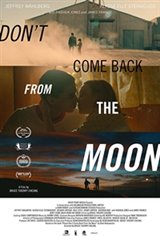 Mickey, a wayward teenager living on the fringe of the California Desert, is filled with angst. His father has disappeared. One by one other men also vanish from his decaying working class town. One man props open the door to his bar and leaves a note. I'm going to the moon, it reads. I took the cash.

Mickey tries to escape the bleakness of life by causing trouble with his friends but his rage becomes too much to contain. His rash choices leave him careening towards damaging consequences. Would a budding love relationship be enough to save him?The lure of just giving up and running away is palpable.

Mickey, like his father, face the decision to resist or to heed the call of "heading to the moon."