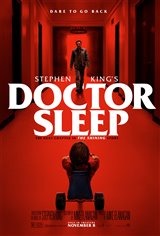 Forty years after the events of The Shining, Dan Torrance (Ewan McGregor) comes across Abra Stone (Kyliegh Curran), a young girl with psychic powers. As she establishes a bond with Dan, her "shine" becomes even more powerful than his.

Through her psychic powers, she witnesses the murder of a boy by a cult known as The True Knot, which preys on children with powers to remain immortal. They feed on the psychic essence produced when people who possess the shine die in pain. When the cult's leader, Rose the Hat (Rebecca Ferguson), learns of Abra's existence, she hatches a plan to kidnap the girl. Dan teams up with friends to save Abra from the cult.

Based on the novel Doctor Sleep by Stephen King, a sequel to his novel The Shining, which was made into a movie in 1980.