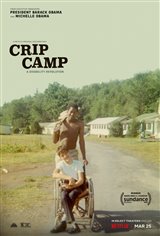 Down the road from Woodstock, a revolution blossomed in a ramshackle summer camp for teenagers with disabilities, transforming their lives and igniting a landmark movement.

Executive producers include President Barack Obama and Michelle Obama, Tonia Davis and Priya Swaminathan, and Oscar-nominee Howard Gertler (How to Survive a Plague).