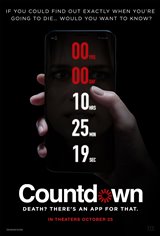 When everyone around her installs an app that tells them how many years they have left to live, a young nurse named Quinn (Elizabeth Lail) also does it, just for fun. When it tells her she has only two days before her life ends, she decides it's fake, but meets someone tells her his girlfriend had the app and died right when the app said she would.

Quinn begins to believe people are being targeted to die because of the app, so she gets a new cell, but to her horror, the app quickly downloads itself onto her new phone right in front of her eyes. She enlists the help of a friend to figure out how to change her fate before she dies.