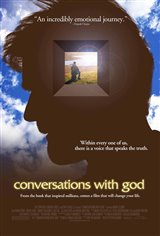 The true story of Walsch (Henry Czerny) who, at the lowest point in his life, asks God some very hard questions. The answers he gets from God/within become the foundation of an internationally-acclaimed book series that has sold over 7 million copies and been translated into 34 languages. The film chronicles the dramatic journey of a down and out man who inadvertently becomes a spiritual messenger and bestselling author.