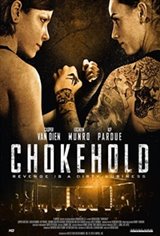 A young woman's story of reconciliation, revenge and redemption. After her father (Casper Van Dien) is unceremoniously murdered by the Russian Mafia, Zoey Delacroix (MMA Fighter, Melissa Croden) finds herself salvaging the family gym while searching for the killer.

The underground fighting world, run by the Russian Mafia, seems to be the only lead and the path she must take for justice. She decides to put her dreams of professional MMA aside and fight her way through the underground ring of street fighting to avenge her father's death.