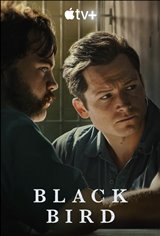 When high school football hero, policeman’s son, and drug dealer Jimmy Keene (Taron Egerton) is told by his lawyer to plead guilty so he can get a deal to serve only four years in prison when guns are found in his home, he does it. So when the judge sentences him to 10 years, he's shocked. After serving a few months, Jimmy is approached in prison and offered the choice to stay where he is in the minimum-security prison and serve his full sentence with no possibility of parole, or enter a maximum-security prison for the criminally insane in order to befriend suspected serial killer Larry Hall (Paul Walter Hauser).

The authorities want Keene to elicit a confession from Hall and find out where the body of at least one of his young victims is buried, before Hall’s appeal goes through. With his father having just suffered a stroke, Keene is desperate to get out as soon as possible, but getting the truth out of Hall, a habitual liar, won't be easy.

Based on the memoir Black Bird: One Man's Freedom Hides in Another Man's Darkness by James Keene and Hillel Levin.