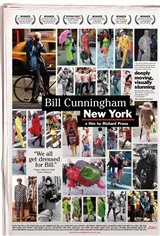 Bill Cunningham is obsessively interested in only one thing—the pictures he takes that document the way people dress. Bill has lived in the same small studio above Carnegie Hall for 50 years, never eats in restaurants and gets around on a worn-out bicycle – his sole means of transportation.

Cunningham has tried to live his life as an unencumbered man. He wants only his independence to be able to point his camera when beauty crosses his path.

With this singular goal, he has managed to create a poignant and ongoing chronicle of the intersection of fashion and society in New York over 50 years—in effect, a portrait of New York City itself.