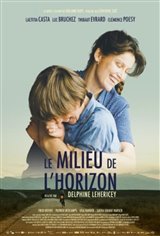 In Europe during the hot summer of 1976, Gus, a teenager who lives with his family on a farm, witnesses the stress the drought has put on his parents’ farm and as a result, their relationship. His father is a violent man, while his mother is spending more and more time with her old friend, Cecile, who has turned up after years away, newly divorced. When Gus witnesses the two women in an embrace, he worries that he may be abandoned by her. His father is also aware of this secret affair, which doesn’t make things any easier. When the storm finally arrives, the drama reaches a new level.