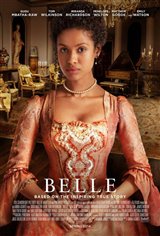 Dido Elizabeth Belle was born in June 1763 to Sir John Lindsay, a British navy captain on the HMS Trent, and Maria Belle, an African slave. It is speculated that Lindsay freed Belle from a Spanish ship on which she had been enslaved. It remains unclear if Dido was born in England or the West Indies.

After her mother died when Dido was five years old, Lindsay sent the little girl to live with his uncle, William Murray, the first Earl of Mansfield and Lord Chief Justice, one of the most influential judges in England. There in Hampstead, Lord Mansfield and his wife, who were childless, raised and educated Dido, along with her cousin Elizabeth, whose mother had also died. Dido was not treated as an equal family member in front of company: she often ate alone when her great-aunt and uncle were entertaining guests, only joining the women for post-dinner coffee. She was not, however, treated as a slave either. Anywhere outside of England she would have been defined as one, since her mother was a slave. It was Lord Mansfield who took the first step in preventing that. In 1779 a portrait was painted of Dido and Elizabeth together, which currently is displayed at Scone Palace in Perth, Scotland, the home of the present Earl of Mansfield.

In 1772 Lord Mansfield presided over the trial of an escaped slave, called “Somersett’s case.” He decreed that slavery was unlawful in England and that a master could not export British slaves. This was the first step taken to actively abolish slave trafficking in the country. It has been suggested that Lord Mansfield’s decision was greatly influenced by his personal experience with Dido.

Lord Mansfield greatly took to Dido at home, appointing her the only one to handle his vast amounts of correspondence, a task usually reserved for an educated male scribe. She also supervised the poultry and dairy yards, tasks that many women of the time period performed.

After a visit to the family, a guest remarked in his diary that Lord Mansfield “called upon [her]…every minute for this and that, and showed the greatest attention to everything she said.” Despite Lord Mansfield’s affection for her, Dido’s legal status during her early years is unclear.

When Lord Mansfield died in 1793, the confirmation of her freedom was stated in his will, along with an outright sum of 500 pounds and a 100-pound annuity. She was earlier left the sum of 1,000 pounds in 1788 by her father in his will.

Dido married John Davinier in 1793 and had three sons (twins Charles and John, born in 1795, and William, born in 1802). She lived with Daviner in what is now Ebury Street, Pimlico, until she died in 1804 at the age of 43. She was buried in St. George’s Fields, in the cemetery of the church where she was married.