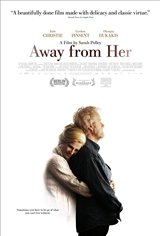 Married for 50 years, Grant (Gordon Pinsent) and Fiona's (Julie Christie) life together is full of tenderness and humor, their serenity broken only by Fiona's restrained references to the past, complicated further by her increasingly evident memory loss. Moving Fiona into a nursing home specializing in Alzheimer's disease, Grant is not allowed to visit for the first month so she can "adjust."

When he sees her again, Fiona has forgotten him and turned her affection to Aubrey (Michael Murphy), another resident in the home. Heartbroken, Grant visits daily, bearing witness to the growing bond between her and Aubrey. When Aubrey's wife takes Aubrey home, Fiona becomes deeply depressed, and Grant embarks on the greatest act of self-sacrifice of his life.

Canadian Connection: Filmed in Ontario. The director and most of the cast are Canadian.