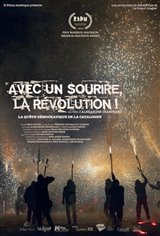 Four decades after the death of the Spanish dictator Franco — but not the end of Francoist Spain, the forces of Catalan society unit in order to organize a referendum on self-determination. Workers, artists, students and elected officials take to the streets and prepare to hold this historic vote, despite the firm ban of the Spanish government, which threatens them with violent repression.

And yet, these militant citizens parade in peace, armed with a simple smile and their faith in peaceful resistance.