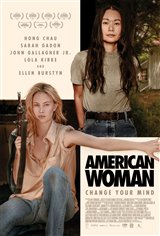 American Woman offers a fictionalized account of the 1974 kidnapping and radicalization of Patty Hearst from the point of view of Jenny (Hong Chau), a political activist wanted for bombing a draft office. She's lying low, working as a caretaker for an elderly woman (Ellen Burstyn) when she's asked to join revolutionaries, Juan and Yvonne (John Gallagher Jr., Lola Kirke) who are part of a group that kidnapped well-known heiress Pauline (Sarah Gadon). A publisher has asked them to put their stories and thoughts on paper, in order to publish a book. Jenny is supposed to help them organize their thoughts, take notes and type out a manuscript.

She reluctantly agrees, and joins the three in hiding at a farmhouse in upstate New York. Jenny soon discovers that Juan is emotionally and physically abusive towards Pauline, and witnesses him forcing Pauline to read something he's written. He records her and sends the tape to a radio station to make it seem as if she's fully supportive of their cause and not being held against her will. Jenny has difficulty getting Juan to actually write something, so when he announces they're going to rob a grocery store for cash, she decides she has to make a move.

Filmed in Ontario. Director Semi Chellas and star Sarah Gadon are both from Toronto. Several other cast members and most of the crew are Canadian.