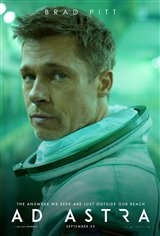 Despite having been declared dead many years ago, Clifford may actually be alive, and he could be connected to a series of mysterious explosions and a top-secret military project. As Roy makes his way across a series of increasingly dangerous outposts on the Moon and Mars, forces converge to stop him from finding answers to his father's failed mission, while another impending explosion threatens to destroy life as we know it.