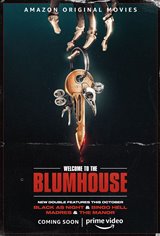 An anthology of unique and unsettling thrillers showcasing diverse casts led by emerging filmmakers, including several female directors. Produced by Blumhouse — maker of provocative films and television such as Get Out, Whiplash, “Sharp Objects” and The Gift — and available exclusively on Amazon Prime Video worldwide, the first four films in the series will be released in October 2020, with four more titles set to arrive in 2021.

Welcome to the Blumhouse focuses on thrillers, suspense and psychological dramas — genres beloved by audiences but rarely offered in theaters. The films explore relatable themes about cultural differences, societal pressures and personal anxieties, and feature emerging stars alongside established actors in surprising new roles. While each film stands on its own, they all share a through-line of family and love as either a redemptive or a destructive force.
The result is a series of unforgettable psychological thrillers that tap into our deepest fears and are guaranteed to keep audiences on the edge of their seats.