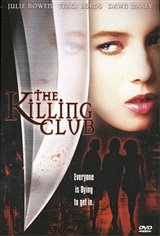 Jamie (Julie Bowen) is a successful novelist, but her relationship with her possessive boyfriend has her feeling trapped. When things get out of control, Jamie accidentally kills him. Jamie's best friends Laura (Traci Lords) and Arlene (Dawn Maxey) convince her to cover it up, because they're afraid she won't be treated fairly within the court system. But when things get more complicated, the three women join forces to commit more murders of abusive, cheating and lying men.

Also known as The Killing Club.