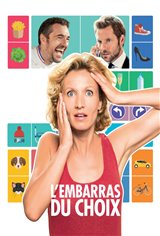 Juliette, a woman in her forties who works for her father and depends on him to make most of her decisions, is dumped by her boyfriend when he grows tired of her constant inability to make even the most minor decision. Juliette’s friends take her out to a club to cheer her up. She meets Paul, a gorgeous Scottish banker visiting Paris on business. They spend the night together, but the next day he tells her he’s engaged to marry his British girlfriend.

Down in the dumps, she goes with her friends to a party and assures them she’ll hit on the next man she sees at the food table. He turns out to be Stephen, a well-known chef who’s a graduate of the same culinary school as her father, which earns her father’s instant approval. Feeling she’s finally found happiness with Stephen, she's thrown for a loop when Paul returns, telling Juliette he broke off his engagement for her. Not only that, but both men suddenly propose. This predicament requires Juliette to make the most important decision of her life.