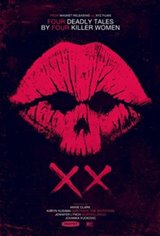 The Box, directed by Jovanka Vukovic, is an adaptation of a short story by Jack Ketchum. Just before Christmas in New York City, a little boy (Peter DaCunha) is curious about a gift box carried by a stranger. After he gets a peek inside, the boy begins behaving strangely.

Annie Clark directed The Birthday Party, starring Melanie Lynskey as a mother panicking while trying to throw the perfect birthday party for her seven-year-old daughter — everything goes wrong, especially when she finds her husband dead.

Roxanne Benjamin helmed Don’t Fall, about college students who go on a camping trip that gets violent when they wander into a a stretch of sacred desert.

Finally, Karyn Kusama offers up Her Only Living Son. This time, a mother is trying to make plans for her son's birthday, only to have him ruin her plans at each turn.