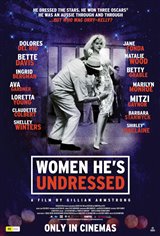 Legendary Hollywood costume designer Orry-Kelly won multiple Academy Awards for his work on such classics as An American in Paris and Some Like It Hot.

Today most people have never heard of Orry-Kelly. But during Hollywood's golden age, he was a leading costume designer who worked with legends such as Marilyn Monroe, Bette Davis, Natalie Wood, Ingrid Berman and Claudette Colbert.

Orry emigrated from Australia to America in the 1920s and as a gay man, kept many secrets until his death in 1964. In vignettes, he's portrayed by Australian stage actor Darren Gilshenan, while real-life associates such as Angela Lansbury and Jane Fonda talk about working with Orry.