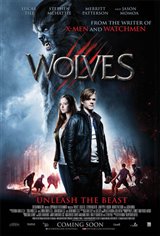 Cayden Richards (Lucas Till), a young, handsome 18-year-old jock had it made, until the murder of his parents forced him to leave town before he revealed his dark secret. Cayden finds his way to an isolated town where he discovers a group of people with a similar affliction.

There he meets a man named Wild Joe, who helps set him on the path to discovery his family's history. Along the way he meets Connor (Jason Mamoa), who viciously runs the town in a bid for power. Cayden must fight back before he is hunted down himself.