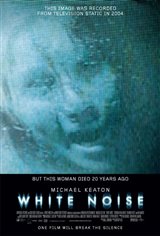 Jonathan Rivers (Michael Keaton) is a successful architect whose peaceful existence is shattered by the unexplained disappearance and death of his wife, Anna (Chandra West). Jonathan is eventually contacted by a man (Ian McNeice), who claims to be receiving messages from Anna through EVP (Electronic Voice Phenomenon). At first skeptical, Jonathan then becomes convinced of the messages' validity, and is soon obsessed with trying to contact her on his own. His further explorations into EVP and the accompanying supernatural messages unwittingly open a door to another world, allowing something univited into his life.