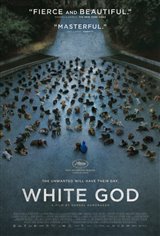 Lili, 13, loves her dog Hagen, with whom she has forged a special relationship. However, when her mother, for professional reasons, has to go to Australia for three months, Lili has no choice but to move in with her father, who does not want Hagen in his apartment. When he finds out he has to pay fees to keep a dog at his place, he takes the dog and abandons him under a viaduct.

Left to himself, hunted by dogcatchers who want to put him in the pound, Hagen meets other stray dogs before being captured by a canine fight organizer. Winding up in a kennel, he becomes the head of a pack that escapes and spread onto the streets of Budapest, spreading terror in their path. All the while, Hagen tirelessly searches for Lili, while she posts Missing posters and searches for him.