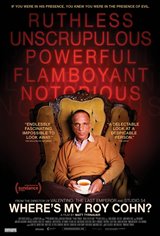 A lawyer hated by many, Roy Cohn promoted and enabled the careers of powerful men who influenced America in negative ways, including Joe McCarthy, Richard Nixon, John Gotti and Donald Trump.

Matt Tyrnauer has dug up a wealth of dirt on Cohn, who has been called "evil," "a political puppeteer" and a hired gun."

This thriller-like exposé connects the dots, revealing how a deeply troubled and completely unethical master manipulator was instrumental in shaping the current American nightmare.