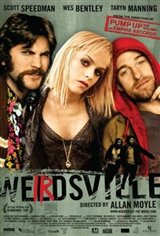 Nothing much happens in the lives of slackers Dexter (Scott Speedman) and Royce (Wes Bentley) besides getting high and hanging out with Royce's girlfriend Matilda (Taryn Manning). This all changes one wintry Northern Ontario night when Mattie overdoses on a stash of Dexter and Royce's drugs -- unfortunately, drugs fronted by local kingpin Omar, which they've recklessly agreed to sell in order to cover their previous drug debt.

When Matilda, a part-time hooker, appears to fatally overdose, the two men Dexter and Royce reluctantly agree they should bury her in the boiler room of a drive-in where Dexter was employed. Fortunately, they discover that Matilda is still alive before they bury her; unfortunately, they don't make this discovery until after they've interrupted some novice Satanists in the act of carrying out their first human sacrifice. Things get worse when they run afoul of drug kingpin Omar, and also incur the wrath of an angry mall security guard.