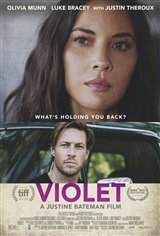 Los Angeles–based film executive Violet (Olivia Munn) has worked hard to gain status in an industry still dominated by older white men, often at the expense of her dignity. She listens to the voice inside her head that tells her "You can do it. Go for it!" But that voice is also full of criticism, telling her "Change that shirt. If you wear that to the party no one will talk to you." She's made decisions to avoid those kinds of "worst-case scenarios" in her romantic life, family life and her professional life.

However, that voice keeps her from being herself, and nowhere is this more apparent than in her relationship with her boss (Dennis Boutsikaris), who exerts his power by regularly humiliating her in front of clients. Violet appears to be confident, chilly, even callous, but inside her a cauldron of desperate anxieties is on the brink of boiling over. When a friend's comment makes her realize that the voice inside her head has been lying to her, her entire life, she decides to make changes in her life.