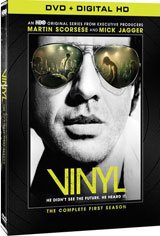 The story of music executive Richie Finestra (Bobby Cannavale). An avid music lover, Richie wanted to be involved in the music industry, but didn't have any musical talent. Instead, he begins as a manager for his first client, blues artist Lester Grimes (Ato Essandoh). He gets him a record deal, but under the name Little Jimmy Little, singing pop music.

Years later, it's now the 1970s, and Richie has his own company/label, American Century Records. When they have trouble signing new acts and their existing acts are failing to have hits, Richie and his partners decide to sell the company to a German team. When Richie becomes involved in a murder, he begins to unravel, putting the deal in jeopardy.