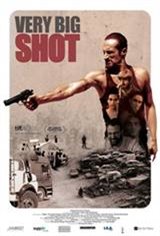 In a working-class district of Beirut, brothers Ziad (Alain Saadeh) and Joe (Tarek Yaacoub) run a takeout pizzeria that's a front for a small but lucrative drug-dealing business. Their youngest brother Jad (Wissam Fares), who is doing time for a crime Ziad committed, is about to be released from prison. Ziad and Joe have decided to go straight and use the profits they earned selling drugs to open a restaurant. But Ziad's supplier is a powerful drug lord who'd rather not lose his dealers, so he convinces them to take on one last job. He gives them one last task: to smuggle a million-dollar shipment of a locally manufactured amphetamine to Syria, to be used by militia fighters.

To pull off the smuggling operation without being detected, Ziad, Joe, and Jad decide to pose as film producers so they can hide the drugs in cans of exposed film reels, which don't have to go through X-ray scanning at the Beirut airport due to the radiation that can wipe the footage.