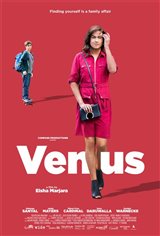 Sid, 30, a designer of Indian origin, has decided to become a woman. Although he’s resolute about his decision, he still hasn’t made the announcement to his traditionalist parents.

As his overbearing mother urges him to marry a nice woman of their caste, Sid meets Ralph, his 14-year-old son from a relationship when he was still searching for his true identity. Things get tense when Ralph’s mom, who has since married, realizes her son has found his biological father, even though Ralph thinks having a transgender dad is "cool."