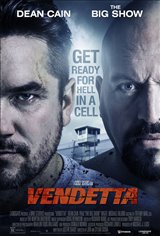 It's bad news when a detective (Dean Cain) learns that the two convicts he put away are going to walk due to a missing witness. The bad news continues as the detective learns his wife has been murdered by the recently freed criminals.

The event sends him into a rage-fuelled hunt for revenge. As a result he kills one of the suspects and lands in prison, where he hopes to complete his plan of vengeance on the other murderer, who is now back behind bars. However, once inside, he finds out prison is no place for an ex-cop when he becomes a target.