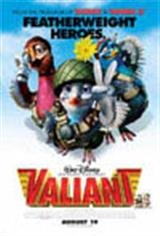 Despite his small stature, Valiant's ambitions are enormous as he keeps a stiff upper beak and endures rigorous training in preparation for a dangerous mission to deliver vital messages to troops behind enemy lines. With a shortage of wingpower in the royal fleet due to increased attacks by a brigade of vicious enemy falcons, the mission falls to Valiant and the unlikely heroes of Squad F to try and save the day.