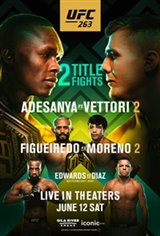 Surging middleweight contender Marvin Vettori will attempt to make history on June 12, as looks to dethrone 185-pound champion Israel Adesanya and become Italy's first UFC titleholder when the two collide in a highly anticipated rematch in the main event of UFC 263. Plus, flyweight standouts collide in a rematch of one of 2020's best fights when Deiveson Figueiredo defends his 125-pound title against Brandon Moreno, and it's a five-round welterweight battle when England's Leon Edwards attempts to extend his nine fight unbeaten streak against returning star Nate Diaz, who is making his first start since 2019