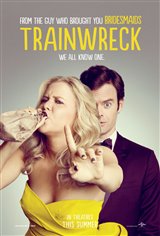 When she was very young, Amy (Amy Schumer), whose parents filed for divorce after her father couldn't stay loyal to their mother, is told by her father that monogamy isn't realistic. When she grows up, she sets out to prove her father right, having a string of meaningless one night stands, refusing to believe a man could ever have romantic feelings for her.

When Amy voices her hatred of sports and disdain for sports fans during an editorial meeting, she's given the assignment of writing a story about a successful sports doctor (Bill Hader), who winds up falling for her, much to her disbelief.