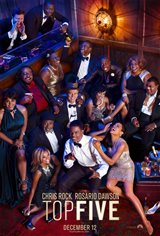 New York City comedian Andre Allen (Chris Rock) becomes a huge star when he begins starring in a series of feature films playing the role of a justice-seeking, machine gun-toting bear called Hammy. He also finds he can't keep out of the public eye when he gets engaged to a reality star.

However, Andre realizes he's reached a turning point. He doesn't feel funny and doesn't want to do funny movies anymore. When a journalist (Rosario Dawson) convinces him to let her do an article about him, he's forced to face some painful truths about his career and life.