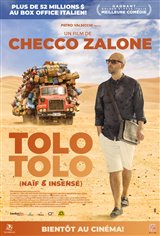 Checco, a young entrepreneur from Puglia, escapes to Africa after his sushi restaurant goes belly-up. In an attempt to reinvent himself, and simultaneously evade the debt collectors in Italy, he begins working as a server at an upscale resort, where he makes new friends and tries to begin again. Just as he starts to settle into his new African life, war breaks out and terrorists attack the area, forcing Checco and his friends to migrate… setting him off on an ironic journey as an illegal immigrant.