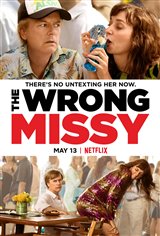 At the airport, Tim Morris (David Spade) randomly bumps into a beautiful girl named Missy (Molly Sims) and they spend time together while waiting for their respective flights. Later, he decides to throw caution to the wind and invites her by text to his company’s corporate retreat in Hawaii.

However, after boarding the flight, he discovers he texted the wrong Missy (Lauren Lapkus), when a woman from a past blind date that went really badly shows up at the airport for the weekend getaway instead. Horrified that his bosses and co-workers believe this is the woman he's been bragging about, he has to endure her incredibly inappropriate antics, until he comes up with a way to fix the situation.