The World Belongs to Us 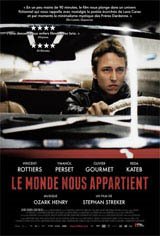 Small-time thief Pouga wants to follow in the footsteps of his father, a notorious criminal. Ignoring the warnings of Magali, his social worker, he forms an alliance with a mobster who is a former accomplice of his father. Julian, a soccer player with a bright future, dreams of being drafted by a professional team. But his ambitions are compromised by his lack of discipline, to the chagrin of his father, a firefighter with gambling problems.

While Pouga declares in vain his love to Magali, promising her a comfortable life, Julien tries to convince his agent that his hectic life doesn’t interfere with his performance. Just when everything seems to be going great for both men, Pouga learns of the death of his father, and one of Julien’s teammates injures his leg. A brief nocturnal encounter between the two men, who have never met but are from the same small Belgian suburb, will forever change their destiny.