The World According to Amazon 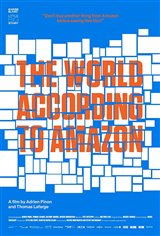 The world's number one online retailer, Amazon ships more than 5 billion parcels every year to some 300 million customers around the world. But this success, and the power held by the company’s controversial founder and CEO, Jeff Bezos, raises ethical questions. Amazon is now able to dictate its conditions to governments around the world, while Bezos — who has already launched his own rockets into space — is constantly seeking to expand his empire.