The Wild Run: The Legend 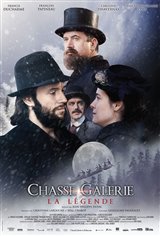 Lavaltrie, late nineteenth century. Joe Farrel and Liza Gilbert love each other in secret. Or so they think. The bond between the young farmer and the haberdasher has come to the attention of Vincent, a notary, whose marriage proposal was refused by Liza three years earlier.

When Joe’s crops mysteriously burn, he’s forced to accept a job as foreman for the winter at a remote logging camp. The lovers promise to write, but Vincent cuts off their letters, while steadily but discreetly courting Liza.

With no news from Joe, Liza sinks into despair, not realizing she’s the victim of a curse placed on her, the night of her birth, by Jack Murphy, none other than the Devil. Twenty-five years earlier, on Christmas Eve, eight woodcutters caught in a storm far away from home signed a deal with Murphy to board a flying bark canoe in order to join their families. Having broken the pact, Liza’s father unwittingly damned his daughter.