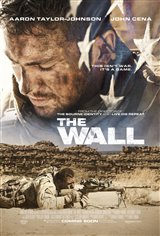 In this psychological thriller, an epic stand-off takes place between an Iraqi sniper and two American soldiers (John Cena and Aaron Taylor-Johnson), armed only with regulation rifles. When one of the soldiers is critically injured and finds himself unable to move, the sniper has the Americans pinned down with nothing but a crumbling wall between them.

Knowing their lives are on the line, the soldiers are mentally and physically tested under the harsh elements of the Middle Eastern desert, but their will to survive burns stronger than ever.