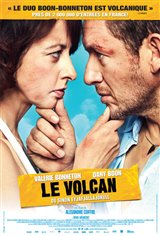 Alain (Dany Boon) and Valerie (Valerie Bonneton) are consumed by so much hate and resentment for one another, that they would only be forced into a room with one another for the sake of their daughter. Unfortunately for them, they wind up on the same plane travelling to Greece for their daughter’s wedding.

As the fates would have it, the plane is grounded due to the eruption of the Icelandic Volcano, Eyjafjallajokull. The former couple try their best to put their differences aside to get to the wedding on time, but their competitive and spiteful habits call for a very bumpy ride.