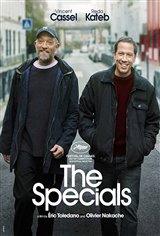 For 20 years, Bruno has directed La Voix des Justes, a small Parisian organization that welcomes and supervises young adults with autism who have been abandoned by the system. He recruits his employees at L'Escale, a social reintegration association for delinquents run by his friend Malik. The two men, who have their hands full, count on a support network that recognizes the importance of their work. Social services have a different opinion. On the grounds that Bruno does not have official accreditation and hires non-specialized delinquents, two officials open an investigation into La Voix des Justes, widely requested by various official medical and social authorities in Paris. Unperturbed in the face of this threat, Bruno, an Orthodox Jew, continues to pursue his mission but chooses to neglect his personal life.