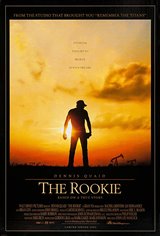 Based on the real-life story of baseball player Jim Morris, a promising young pitcher who was forced to drop out of the minor leagues because of a shoulder injury. Twelve years later, Jim (Quaid) has become a married high school teacher in Texas, and the coach of the school's baseball team.

With his team in a slump, Morris makes a deal with his players, promising that if they win the district championships, he will try out for a major-league organization. The bet motivates the team enough to go from worst to first, making it to the state playoffs for the first time in the history of the school. Forced to live up to his end of the bargain, Jim is almost laughed right off the tryout field, until he gets onto the mound and surprises the scouts (and himself) by clocking successive 98 mph fastballs, which results in him being signed to the minor-league team, the Tampa Bay Devil Rays. Although he still has a ways to go, Jim discovers that it's never too late to believe in your dreams.