The Rest of Us 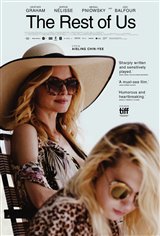 Cami (Heather Graham) receives a call telling her that her ex-husband had a heart attack while taking a bath and drowned. When she tells her teenage daughter Aster (Sophie Nélisse), the girl responds by saying she didn't even know he took baths. The divorce was less than amicable — he was having an affair with Rachel (Jodi Balfour), and when they married, they moved into the home Cami and Aster once shared in with him. Not only that, but they had a daughter, named Talulah, whom Aster refers to derisively as "Rainbow."

Cami discovers that her ex has left his new family destitute, with unpaid bills and without even a home, because the bank has put it up for auction since he hadn't paid the mortgage in six months. When Cami discovers that Rachel doesn't have anyone to lean on because her friends and family all see her as a "homewrecker," she offers her a place to stay.