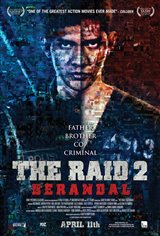 After the first raid, rookie cop Rama (Iko Uwais) thought it was all over and he could resume a normal life. He was mistaken. The thugs he took down were nothing but small fish in a pond much larger than he ever dreamed possible.

With his family at risk, Rama has only one choice to protect his infant son and wife—he has to go undercover and infiltrate the ranks of a ruthless Jakarta crime syndicate in order to expose corrupt politicians and corruption within his police force.